On Saturday, 25 April 2015, just before noon local time in Nepal, nearly 10 miles (15 km) down below the surface of the earth, the stone of the earth's crust began to give way. The continental behemoth of the Eurasian plate was swallowing part of the Indian subcontinent whole. This was not the first time such a catastrophe has happened in human history, but with the growth of population and development in the region, it shall be the most devastating.

Within 30 seconds of terrifying trembling, the entire basin within which the capital of Kathmandu shifted 10 feet (3 meters) southwards. Not only that, but a swath of land 75 miles long by 30 miles wide (120 km by 50 km) had been lifted three feet (one meter).

Upon Mount Everest, glaciers and ice sheets gave way, killing 19 climbers at base camp, and trapping more on the ascent above.

Seismologists measured the temblor at 7.8 on the Moment Magnitude (Mw) scale, or 8.1 on the Surface Wave Magnitude (Ms) scale. The full extent of death and destruction has still not been measurable. Thousands, at least, are dead, thousands more injured, hundreds of thousands have become displaced persons, and ten million or more have been affected in multiple nations: Nepal, the Tibetan area of China, India, and Bangladesh.

Throughout the next several hours and days a large number of aftershocks, with magnitudes as high as 6.6 and 6.7 Mw, continued to rock the nation, causing additional collapses and landslides, and sending already-fearful Nepalese into panic.

As the sun rose over the U.S. west coast, I read the news online.

At 10:29 AM Pacific Time, I had shared out the USGS report of the 7.5, then revised to 7.9, then finally set at 7.8 earthquake. Already it was known that more than a thousand were dead. It was going to be a long day.

Within a few more minutes, by 10:39 AM Pacific Time, I was sharing information coming out of the U.S. Embassy Kathmandu, Nepal about immediate cash contributions to relief efforts. USAID had a Disaster Assistance Response Team (DART) en route. American citizens were being advised to check in with the State Department to ensure they were alive and well.

Yet I was supposed to be somewhere. More updates would need to wait. By 11:11 AM I was sitting at a table at PayPal's Town Hall aware of what was going on. I was there at the HackingEDU Training Day looking to tell the student attendees about GlobalCommit.org, my non-profit  program dedicated to Social Media Emergency Management (SMEM), as well as to attract them to work on a "Hacking for Social Good" program which we'll be running at HackingEDU — the world's largest educational hackathon — in October 2015. 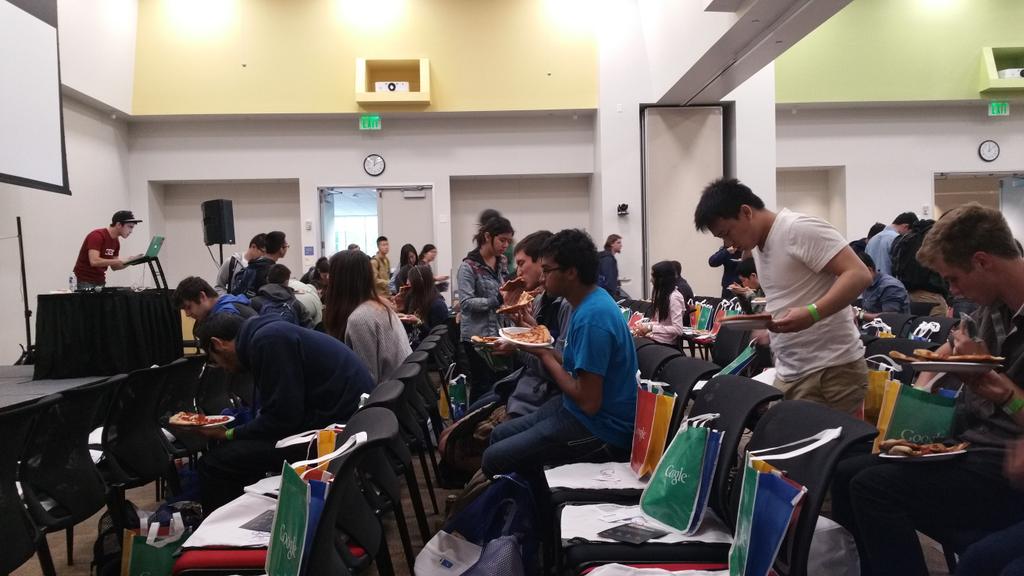 By noon, attendees were filtering in. However, I would have a tremendous amount of trouble concentrating on Training Day. My mind was already on the opposite side of the earth.

By 1:23 PM Pacific Time, I was in conversation with Jen Q Adams, Executive Director of LAHAF, Inc. (Lend a Hand and Foot). For those who don't know, Jen's organization is the 501(c)3 fiscally sponsoring my work on GlobalCommit.org. We chatted briefly. Many groups were already in motion. Third Wave Volunteers were already planning to deploy. It was time to spin up a new SMEM initiative: Nepal Disaster Response.

I was describing to people what it was that GlobalCommit does while building the Facebook group and gathering information on-the-fly. Inviting many of the "usual suspects" for disaster relief. Gathering intelligence on what was occurring. I was sitting right next to the IBM BlueMix group who were sponsoring the event. They were impressed. I told them I might hit them up for assistance in the coming days. They were open to it.

I've been pretty pedal-to-the-medal since then. One personal event struck me during this week.

"I just drove past the body of a female mallard at the edge of Highway 101 near Rengstorff. I had driven past it yesterday, and was somewhat saddened to see yet another animal that died due to high-density traffic. What broke my heart was today, to see the same limp carcass still not picked up. This time, beside her was nestled the patient, waiting form of her mate, a male mallard, head down low in his feathers. Simply abiding next to the body of his mate. Mourning? Waiting for her to awaken? Simply unsure what to do next? He sat there, but a few feet from the same rumbling traffic that had taken her life, huddled beside her. There is nothing else akin to such devotion after death. It made me mourn anew for the people of Nepal this morning, and all else who are in grief in this world."

Normally, you post something, and don't expect it to go beyond your own circle of friends. But later that day, I saw a Tweet:

From Jennifer O'Neill: @PeterCorless Thank you for confirming what I feared I saw this morning on 101. My heart is still heaving thinking about it.https://twitter.com/connectorjen/status/593269015453175809"All day I've wondered if anyone else saw what I saw along the side of Highway 101 this morning near Rengstorff. Turns out, someone did. Tonight I found Peter's post on Twitter and all of my sadness at the sight came rushing back. I was on the verge of tears all day thinking about that male mallard. Sometimes nature moves us in a way humans don't."https://www.facebook.com/JenniferONeill/posts/10153243323161543

It is now Thursday, 30 April. I can hardly slow down to even describe everything that's happened between this Saturday and today. However, GlobalCommit.org is in full swing. I am beginning to see a mosaic of the disaster coming together. The next week will be critical in gathering information.

If you wish to help with your own brain, fingertips and eyeballs, please join us: Nepal Disaster Response.

I've been holding off on asking for donations for now, to allow people to focus on first-order issues: food, water, shelter. Yet information is a vital commodity during such disasters. And working day-in-day-out to manage it, aggregate it, collate it, and vet it for accuracy, currency and completeness an is a crucial responsibility and often arduous task. It's herding cats of individuals and maintaining baseball cards of organizations. There's a lot of balls in the air. Let's hope we catch as many as we can.